Do you remember the painting of Phoenix and Dragon from “There’s no smoke without fire”?
Sure you do – it looked like these two mythical creatures were fighting each other.
Or maybe not? We’ll come back to this later.

But these two are definitely going to start a fight:

The theme of a phoenix fighting a dragon is actually quite popular in fantasy genre and video games. Remember Heroes of Might and Magic 2?

A lightning-fast, fire-breathing airborne force with two-hex attack…
One of the best in game, although falling a bit short when facing the enemy pictured above – the black dragon.
(in fact every monster, warrior or mage fell short when pitted against this beast).

Now I want to ask you a question.

What’s wrong with this picture?

Well, maybe it could in general, but I must disappoint you – not on the Indo-European ground!
Such idea is utterly false, impossible and INCONCEIVABLE!

You already know what a dragon was in Indo-European mythology.
A vile powerful beast, embodiment of chaos and archenemy of the world order (see DRAGON for a reminder).

But do you know what a phoenix REALLY was?

So basically, phoenix was a large colorful eagle-like bird that lived very long and when it died
(sometimes in flames), from its dead body (or ashes) a new bird was born.

Look – weeping and singing a dirge to itself, while the flames start flickering around…
Does it really look like it could take on a dragon?

What is more – it wasn’t even so fiery! They said “colorful”.

I agree – flaming birds of blazing fire look really cool, ekhm… hot,
but true phoenix was probably more like this one:

Did you just say “too Aztec-ish“? We love all the mythologies…
And we love funky played by Bugalu Foundation – check them up!

Coming back to the combat abilities of our birdy – being a colorful, singing incendiary is no special power that could be effectively used in a fight, especially against an ultimate beast of chaos.
No wonder that such event DID NOT EXIST in any of the Indo-European mythologies.
I imagine that the only thing a phoenix could do to “harm” a dragon would be to sit comfortably in the nest and cast insults on the monster. The dragon might get angry so it could burn the bird. Then, brand new phoenix, that got born from the ashes, could again yell at the dragon and so on and so forth until the ultimate serpent died of frustration, heart-attack or something.
Or maybe phoenix could get eaten and self-immolate while inside the dragon’s intestines? That could work, provided these were no fire-resistant.

Hey! Maybe it is how dragons made their fire? They swallowed phoenixes and squished them to death within their bellies each time when a need for a flame arose?
Well, maybe that’s a too far-reaching interpretation…

But if the idea of a phoenix vs dragon battle is wrong, then…
Where did it came from?

1) Phoenix is an eagle-like bird and eagle is a bird of THUNDERER god.
Eagle is an enemy of the SNAKE and all snake-derived monsters (i.e. dragons).
This could make a phoenix the enemy of serpentine creatures.

2) The other interpretation reaches to the ancient China. There was Fenghuang – a fire bird, king of all birds. Although not quite eagle-like, it was “fiery”, so could get easily mixed with original “western” phoenix. Especially that it was depicted as fighting snakes (this could support the argument no. 1).
Fenghuang symbolized the Empress and was paired with a dragon (Loong) – symbol of the Emperor.
The pair Fenghuang – Loong symbolized a blissful marriage, like yin and yang.
It looks like the picture was misinterpreted by Europeans, for whom a dragon was always evil and thus a happy marriage turned into a very bad one…

Maybe the painting by Sunima is not a “combat” but simple “bickering” over scratched car or something even more serious, like dirty dishes?
Or it might be love, but we just do not understand the “facial” expression of birds and dragons.
Better see for yourself.

Whatever the reason for all this fuss…

…now we can get our heads free of angry fire-breathing phoenixes.

However… flaming birds are really hot – just look a this short gallery:

Talking about “hot topics” – I don’t know if you are aware of one of the best voices in Poland – ShataQS.
Several years ago she simply owned one of the popular TV shows. 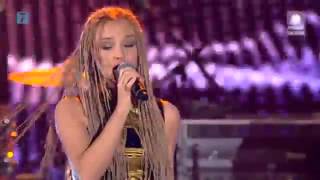 I have really good news – she is about to release a new album soon.
And guess what the name of the album would be?

THE ANSWER IS HERE FENIX

Yeah – just in time for our article!
Check her webpage for some really excellent music.

And with this music I shall leave you now, that would be all for today.

But watch out! There are two more Phoenixes in the Greek mythology – coming soon to Encyclopaedia…